When you want to quit and the boss says: “Stay” (Current Job Counter Offers)

Excerpted from the Chicago Sun Times
By Dick Saunders

You’ve landed a new job, composed a discreet resignation letter and broken the news to your boss. He goes into shock.

“I thought you were as happy with us as we are with you,” he says. “Let’s discuss it before you make your final decision.”

Soon, you find yourself being offered a substantial raise, with promises of great things for the future if you stay. It seems the company that had been taking you for granted has suddenly realized it can’t get along without you.

How flattering! How tempting! How dangerous!
You have just received a counteroffer: an inducement from your current employer to lure you back into the nest after you’ve decided it’s time to fly away.

It’s a delicious moment, and you have every right to savor it. But don’t stop cleaning out your desk. Career-planning experts say that accepting a counteroffer is almost always a bad idea.

“It never works out, not for more that a month or three, so forget it,” advises Burton E. Lipman, author of “The Professional Job Search Program.”

“Career suicide” is Paul Hawkinson’s two-word opinion of counteroffers. In 20 years as an executive recruiter, Hawkinson says he has seen only isolated incidents in which an accepted counteroffer has benefited the employee.

“Counteroffers are usually nothing more than stall devices to give your employer time to replace you,” Hawkinson wrote recently in National Business Employment Weekly. But they’ve just offered you a raise to make you stay. Why would they want to replace you?

Because, little bird, you are a loyalty risk. By threatening to fly to another company, you have demonstrated a lack of fidelity. You are not a “team player.” You will henceforth be regarded with suspicion.

What kind of future can you expect at a company that doesn’t trust you?

Chances are your boss didn’t make that counteroffer because he wants to have you around forevermore. He just hasn’t got anyone who can fill your shoes at the moment. Once a suitable replacement is found, you’ll be persona non grata.

The time to leave is when you’re ready to go, not when your boss is ready to get rid of you.

But it would be so much easier to stay in the old nest. Like any venture into the unknown, a job change is tough.

“That’s why,” says Hawkinson, “bosses know they can usually keep you around by pressing the right buttons.”

Don’t tear up that resignation letter.

Ask yourself why you wanted to leave the job in the first place. Chances are, those reasons still exist. The counteroffer only temporarily cushions the thorns in the next.

“Conditions are just made a bit more tolerable in the short term because of the raise, promotion or promises made to keep you,” Hawkinson says.

“Counteroffers are only made in response to a threat to quit. Will you have to solicit an offer and threaten to quit every time you deserve better working conditions?”

Who wants to work for a company where you have to get an outside offer before the boss will come up with a raise or a promotion? Fly, little bird, and don’t look back.

“During the past 20 years, I have seen only isolated incidents in which an accepted counteroffer has worked to the benefit of the employee.” The Fordyce Letter, by Paul Hawkinson

Mathew Henry, the 17th-century writer said, “Many a dangerous temptation comes to us in fine gay colors that are but skin deep.” The same can be said for counteroffers, those magnetic enticements designed to lure you back into the nest after you’ve decided it’s time to fly away. The litany of horror stories I have come across in my years as an executive recruiter, consultant and publisher, provides a litmus test that clearly indicates counteroffers should never be accepted…EVER!

I define a counteroffer simply as an inducement from your current employer to get you to stay after you’ve announced your intention to take another job. We’re not talking about those instances when you receive an offer but don’t tell your boss. Nor are we discussing offers that you never intended to take, yet tell your employer about anyway as a “they-want-me-out I’m-staying-with-you” ploy. These are merely astute positioning tactics you may choose to use to reinforce your worth by letting your boss know you have other options. Mention of a true counteroffer, however, carries an actual threat to quit.

Interviews with employers who make counteroffers, and employees who accept them, have shown that as tempting as they may be, acceptance may cause career suicide. During the past 20 years, I have seen only isolated incidents in which an accepted counteroffers has benefited the employee. Consider the problem in this proper perspective.

What really goes through a boss’ mind when someone quits?

“This couldn’t be happening at a worse time.”

“This is one of my best people. If I let him quit now, it’ll wreak havoc on the morale of the department.”

“I’ve already got one opening in my department. I don’t need another right now.”

“This will probably screw up the entire vacation schedule.”

“If I lose another good employee, the company might decide to ‘lose’ me too.”

“My review is coming up and this will make me look bad.”

“Maybe I can keep him on until I find a suitable replacement.”

What will the boss say to keep you in the nest? Some of these comments are common:

“I’m really shocked. I thought you were as happy with us as we are with you. Let’s discuss it before you make your final decision.”

“Aw gee, I’ve been meaning to tell you about the great plans we have for you, but it’s been confidential until now.”

“The V.P. has you in mind for some exciting and expanding responsibilities.”

“Your raise was scheduled to go into effect next quarter, but we’ll make it effective immediately.”

“You’re going to work for who?”

Let’s face it. When someone quits, it’s a direct reflection on the boss. Unless you’re really incompetent or a destructive thorn in his side, the boss might look bad by “allowing” you to go. His gut reaction is to do what has to be done to keep you from leaving until he’s ready. That’s human nature.

Unfortunately, it’s also human nature to want to stay unless your work life is abject misery. Career changes, like all ventures into the unknown, is tough. That’s why bosses know they can usually keep you around by pressing the right buttons.

Before you succumb to a tempting counteroffer, consider these universal truths:

Any situation in which an employee is forced to get an outside offer before the present employer will suggest a raise, promotion or better working conditions, is suspect.

No matter what the company says when marking its counteroffer, you will always be considered a fidelity risk. Having once demonstrated your lack of loyalty (for whatever reason), you will lose your status as a “team player” and your place in the inner circle.

Counteroffers are usually nothing more than stall devices to give your employer time to replace you.

Your reasons for wanting to leave still exist. Conditions are just made a bit more tolerable in the short term because of the raise, promotion or promises make to keep you.

Counteroffers are only made in response to a threat to quit. Will you have to solicit an offer and threaten to quit every time you deserve better working conditions?

Decent and well-managed companies don’t make counteroffers…EVER! Their policies are fair and equitable. They will not be subjected to “counteroffer coercion” or what they perceive as blackmail.

If the urge to accept a counteroffer hits you, keep on cleaning out your desk as you count your blessings.

Mr. Hawkinson is publisher of The Fordyce Letter, a monthly Missouri-based newsletter for the personnel, executive search and employment counseling fields. He was formerly an executive recruiter and consultant. 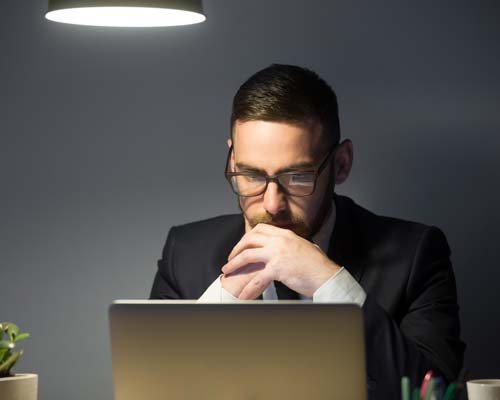